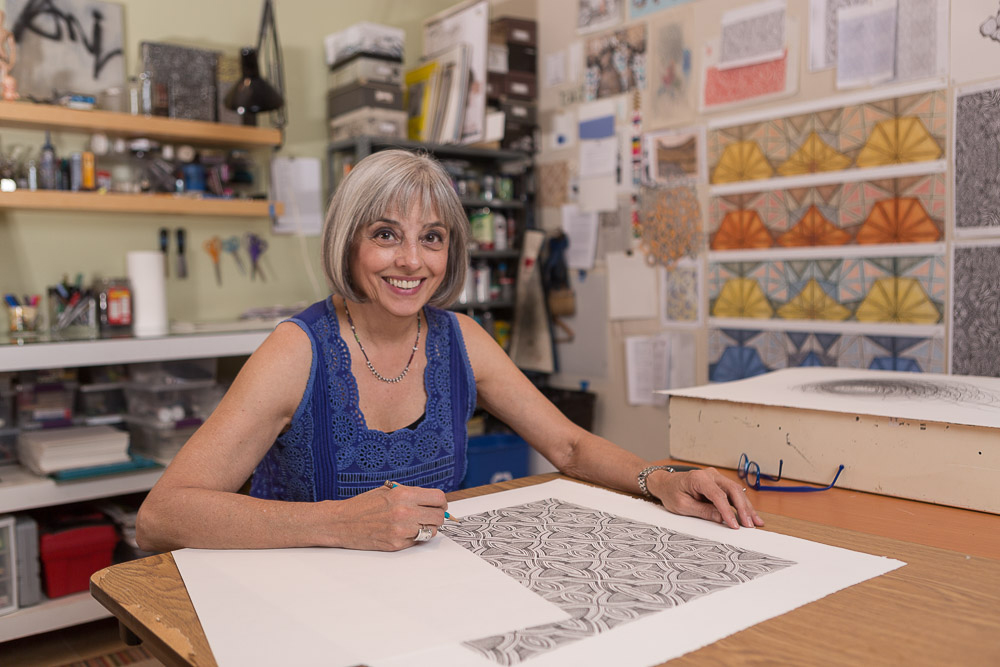 Janet Towbin is an artist living in Arizona whose work is exhibited regionally, nationally and internationally. She has won numerous awards for her paintings, drawings and prints. Her work is in the permanent collection of the Carnegie Museum of Art, The Westmoreland Museum of American Art, The Butler Institute of American Art, the Heinz Endowments Collection, the Free Library of Philadelphia and the Cincinnati Bell Collection.

Janet’s paintings have been selected for exhibition at four consecutive Annual National Midyear Exhibitions at the Butler Institute of American Art, Youngstown, Ohio. She has had solo exhibitions of her work at the Westmoreland Museum of American Art (The Seduction of Black), The Butler Institute of American Art in Salem, Ohio (Janet Towbin: Obsession and Reinvention), and at Tadu Gallery in Santa Fe, New Mexico. In 2004, Janet had a solo exhibit of her prints at Abington Art Center in Philadelphia.

Her series of obsessive drawings based on circles called Small Wonders have been exhibited in several major group shows including: Works on Paper-2004 at Arcadia University, Labor curated by Julie Courtney at Abington Art Center and On the Wall curated by Judy Herman and Richard Torchia at the Main Line Art Center. Janet’s most recent work is a series of mirrored patterns meticulously drawn with graphite on paper. Two of these mirrored drawings were exhibited at the Mesa Contemporary Art Museum in 2014.

In 2008 Janet exhibited 10 prints at The Print Center in Philadelphia in an exhibit titled The Philadelphia Etchings. This exhibit of etchings, curated by John Caperton, was the culmination of Janet’s seven-year collaboration with master printer Cindi Ettinger. Works from that exhibit were purchased for the Print Collection of the Free Library of Philadelphia. Two of her prints traveled to India in 2012 for an exhibit titled Multiple Encounters.

In 2013 Janet exhibited photographs in an exhibit curated by Vicky A. Clark and Cindy Lisica at two venues Pennsylvania. Cast of Characters featured photos of miniature railroad figures in surprising and humorous situations.

Beginning in August, 2015 Janet began a collaboration with Brent Bond of Santo Press, who now prints and publishes her work. Over 75 editions of prints have been created during this short span of time.

From 2003 to 2007, Janet was an adjunct professor at Moore College of Art where she taught in both Textiles and the Basics Department. She was a Guest Lecturer in Moore’s Fine Arts Department in 2006 and a Senior Thesis Advisor. In 2002, she was an intern at The Fabric Workshop and Museum where she worked on the Leonardo Drew project casting paper for his installation Number 80. In spring of 2003 she completed an apprenticeship at The Fabric Workshop and in 2004 had a residency at Cooper Union in Printmaking. In Arizona, Janet taught Printmaking at Arizona State University and was an Artist in Residence at Mesa Art Center’s Printmaking studio from 2009-2011 and 2013-2016.